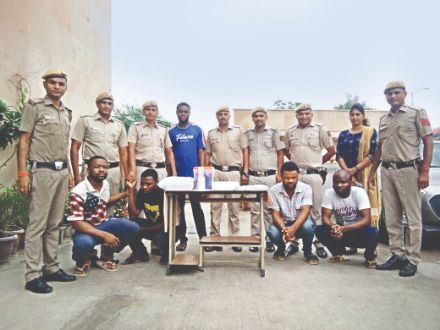 Delhi Police busted a fake call center and arrested 10 Nigerian nationals during a raid conducted in Dwarka’s Mohan Garden area. Police said that they had allegedly been befriending Indians on social media and cheating them.

The accused are aged between 26 – 28 years and failed to produce any Visa or passports and hence were also booked under the Foreigners Act. A total of 48 mobile phones and six laptops have also been recovered from the suspects.

When we look deeper into the case, we discover a complex of web of lies and deceit. The police were on the trail of the group since June 26 when a man from Nawada came to the police with a complaint of being cheated of Rs 45,500 by a woman with whom he had been interacting online.

Deputy Commissioner of Police (Dwarka), Anto Alphonse said – “Earlier this year, the victim had received messages from a foreign number. The person on the other end introduced herself as a foreign woman who was to visit India soon. She made queries about her visit to India.”

He received another call from the same woman on April 2nd and the woman informed him that she had just landed at the Mumbai airport and was headed to Delhi next.

“About an hour later, the victim received a call from an Indian number. The caller said the woman had brought more foreign currency than she was allowed and had no Indian rupees and that she would have to pay a penalty of Rs. 45,500,” the DCP said.

The man agreed to bail her out by depositing the money in a bank account number provided by the caller. The victim approached the police weeks after that incident, when he realized that he had been duped.

The police decided to focus on the Indian number and the mobile with which the calls were made. After investigation, the mobile phone was traced to a house in Mohan Garden. Police raided the house and found the 10 men inside already busy on their laptops and mobiles.

Police have asked people to beware of such fraudulent acts and not be so naive to trust unknown people.

Gang of Autolifters Caught in Dwarka


DMRC Launches ‘Never Give Up’ Campaign to Combat Suicide Cases

Whats up in Dwarka?

Things to Do in Dwarka